Apostille and Attestation Service in Umroli for Birth Certificate 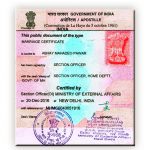 Because India is a member of the HCCH (Hague Convention) of October 5, 1961, abolishing the requirement of Apostille legalization of foreign public documents. Umroli issued Birth certificate apostille is acceptable in approx 107 member-countries of the HCCH. Apostille is done for personal documents such as degree,Birth, Marriage, PCC, Affidavits, educational, diploma, death, Power of Attorney, 12th, 10th, Commercial and Exports documents etc.

What is Normal MEA Attestation on Umroli issued Birth Certificate ?

Normal MEA Attestation is done on Birth certificate for all the foreign countries who are not the member of Hague Convention (HCCH) and where apostille is not accepted.

Indian Apostille Sticker itself is a printed form consisting of 10 fields. On the top is the Title APOSTILLE, under which the text Convention de La Haye du 5 octobre 1961 (English: Hague Convention of 5 October 1961) is placed. The fields contains the following information and Apostille sticker will be placed on the back side of the certificate itself.

Get more info from below sites, For more info of Umroli Birth Apostille,